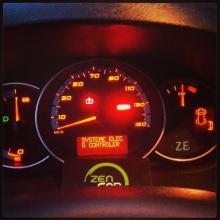 I had heard of Zen Car before. A system with which you can rent electric cars in Brussels. I had also looked at the prices before. It seemed a bit too expensive, with a registration of 40 euro and between 5 and 9 euro per hour - with the added inconvience that you can only really go 100 km with the machine. Still, I thought it was a nice initiative and in March some people told me there's a special 3 euro deal where you get to try the system for 3 months, including over 100 or so euro credit.

The 21st of March I registered, it was the last day the special deal was active (according to the Facebook page) but unfortunately the deal wasn't working anymore on the website. So I called. And then I was still able to register for 3 euros. After 4 weeks of waiting I still had not received my Zencar card, so I contacted them. Apparently they had been waiting a scan of my driving license. So I sent the scan April 19th. Then a long time nothing, then June 13th I contacted them again. Apparently they had not been able to receive my email with the documents. I forwarded the same email again from my mobile phone and called them. Finally, THREE MONTHS LATER after my registration they were able to send me a cart.

June 28th I decided to give it a try, Friday evening. Walked to the spot, managed to open the car after 5 minutes. Then: where is the key? I called. No one answered, just a voicemail. I pressed some buttons in the car and it the same number was being called. Finally I found the key in the dashboard. Put the gear in D, but I was not able to get the car started.
On Monday morning I finally got some response. People from Zencar would show me how to use the car that week. Apparently the problem had been that I pressed the button which you're only supposed to press when you leave the car somewhere. THERE IS NO SIGNAGE AT ALL. How am I supposed to know where to press and not to press? There's also no manual in the car.

I don't really need a car for the city, so there was no real need until a couple of weeks later. Tried to reserved a car on the website. Fail. Called in to reserve the same car. Worked. Went to the car there, managed to start it without problem. But then a cab driver signalled us, and told us we had a flat tyre. Called Zen Car, no one picked up. Pumped up the tyre, continued. Took the car back, all fine.

Then last Friday I wanted to pick up my dear from work. I reserved a car with 4 seats, since a good friend was coming to town. I was going to pick him up from the station. Unfortunately it took me about 30 minutes before I had managed to 1. find out which of the two cars at the zencar parking spot was the right one, 2. get the car started. Again I had called Zencar a couple of times, just to get an answering machine.

Back in the car I COULD NOT TURN THE CAR BACK ON. We tried for another 30 minutes or so. During which I realized that the dashboard said "2 km" somewhere. In theory it should be possible to charge the car, but we were about to miss one of the last buses that evening if we would even try that. So fsck it, I left one more voicemail with information where they could find the car.

Next morning, Saturday morning I got a phone call. They actually left an uptight voicemail about the location of the car. As if I had not left them 10 voicemails the night before. As if they should not be reachable when there is a problem at hand with their silly cars. I called back, told the man to check their darn voicemails. Then later I got another voicemail that I want to hear my story. I haven't called back yet, but I need to get this off my chest. And I think it's better for everyone if it's out there in public.

I tried finding more reviews but I could only find this one useful review at Yelp, stating what I didn't even want to bring up myself after all these experiences:

And not much other information about this system elsewhere either, which raises the question: How many people actually use Zencar?

I've lived in Trento for a while where they also have an electric car system. It is run and supported by local and regional government though, so it's free. Yes 0 euro. You just have to register with a driving license. Then you can use a car for 2 hours (or more if you're friendly with the people who work there), which is enough for the size of the city. I was very happy with the entire system. And this was back in 2007. I really wonder why Brussels can't have a similarly nice system in 2013. Here are some suggestions for Zen Car, or any other car rental company, to make it work better:

I hope this helps. It's the end of the line for me though. I'll go for a classic polluting car rental next time I need a car in the city (which is hardly ever anyway).

You can find more information about car sharing at Moneyless.org.