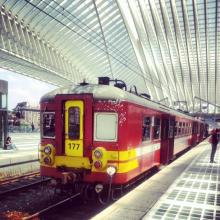 2015 update: Unfortunately the Belgian railways doesn't like travellers between Brussels and Maastricht. As of December 2014 you have to wait 40 minutes at the 300M euro station in Liège, either way when travelling between Brussels and Maastricht. To make things even more ridiculous the train is coming from Hasselt. As if anyone would take a train from Hasselt to Maastricht that takes 1,5 hour (the bus takes less than one hour). You can contact the Belgian railways here.

The normal price for a one way ticket on the train on this trajectory is 18,10 euro. Then there is a special ticket that you can buy at the counter of which I don't know the price.

I just checked at NS Hispeed online and apparently there's also a way to get a return ticket for just 20 euro but you will not be able to change the dates.

Use Railpass for international trains between Belgium and the Netherlands

So my way of taking this train is to get a Rail Pass, a ticket that you can use 10 times to get from one Belgian station to any other Belgian station. You have to write down the date and the stations and that's it. It costs 74 euros. And you can also use it with several people.

If you're under 26 you can go for the Go Pass which is quite a bit cheaper.

Here are the steps:

If you're currently in the Netherlands you won't able to use this the first time you take this trip since the Rail or Go Pass can only be bought in Belgium. The alternative would be taking a bus (for 3 euros) to either Bilzen or Hasselt, and take the train to Brussels from there. This is also the best way to get to Antwerpen from Maastricht (and vice versa). And since the train is often cancelled (without reason!), the bus towards Hasselt is also good in cases where you would otherwise wait 1 hour for the next train. The bus stop of the Belgian bus lines is just outside the train station, a bit behind the local ones.

Bus from Maastricht to Brussels?

You can take local buses all the way from Maastricht to Brussels but this will take a really long time. The local bus from Maastricht to Hasselt (or better: get off at Kiewit train station) is also an option, since you can continue by train and pay 7,60 euro for the Belgian train ride.

The bus from Maastricht can be a good option to take a train to Antwerp. Instead of going through Liège. You could also still take a train from Liège, it's a nice station on which the Belgian national railway company spent 300M euro (unfortunately this money didn't go to increase the frequency or buy new nicer trains for passengers).

But anyway, with the Rail Pass your train travels in and around Belgium can become considerably cheaper.